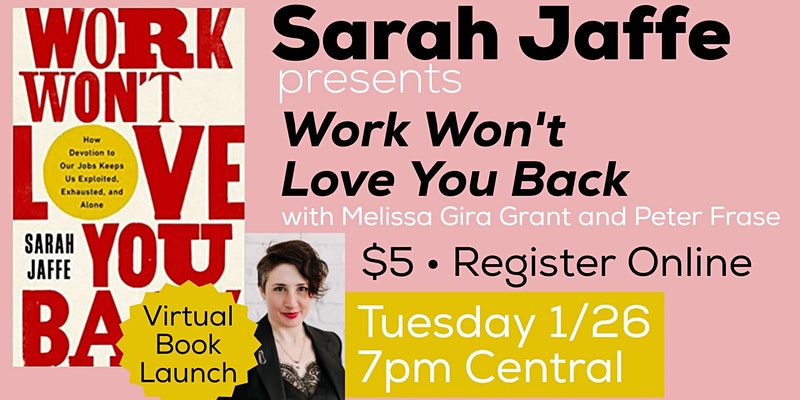 Sarah Jaffe presents Work Won’t Love You Back: How Devotion to Our Jobs Keeps Us Exploited, Exhausted, and Alone

Join us for a virtual book launch and Q&A from Sarah Jaffe on Tuesday, January 26 at 7:00pm Central Time. In conversation with Melissa Gira Grant and Peter Frase.

In WORK WON’T LOVE YOU BACK, Sarah Jaffe debunks the idea that work that you love is not really work, and dismantles the belief that some work should be done out of passion instead of pay. She takes readers to the picket lines with striking teachers who have long stayed on the job even as budget cuts mean class sizes grow and resources shrink—and are then villainized for demanding better for both themselves and their students. She reminds many what it was like to be an intern expected to fulfil the duties of a salaried employee, without the pay, security, and often the basic kindness of appreciation. She even takes us into sports arenas where athletes are often required to carry a message beyond their sport to improve conditions of equality, decency, and respect—all too often at the sacrifice of their bodies, health, identity outside of their brand, and for some, their careers. WORK WON’T LOVE YOU BACK is rooted in understanding the trap of the “labor of love.” Casting off this myth, Jaffe argues, will empower us to work less and demand what our work is worth.

Event access is $5, which gives you access to the virtual event, as well as a $5 virtual gift card to magersandquinn.com. Use it toward your copy of the book, or anything else from our web store! (Access instructions and gift card provided via email 24-48 hours prior to event.)

Sarah Jaffe is the author of Necessary Trouble: Americans in Revolt, which Robin D.G. Kelley called “The most compelling social and political portrait of our age.”

She is a Type Media Center reporting fellow and an independent journalist covering the politics of power, from the workplace to the streets. Her work has appeared in The New York Times, The Nation, the Guardian, the Washington Post, The New Republic, the Atlantic, and many other publications. She is the co-host, with Michelle Chen, of Dissent magazine’s Belabored podcast, as well as a columnist at The Progressive and New Labor Forum.

Peter Frase is a writer and activist. His writing has appeared in *Jacobin*, *In These Times*, and other publications. His book, *Four Futures*, was published by Verso in 2016, and subsequently translated for 11 foreign editions. In it, he uses the tools of social science and science fiction to explore the possible end of capitalism, in the context of automation, ecological crisis, and intensifying inequality. He was born and raised in Minneapolis, and is now based in New York’s Hudson Valley.

Melissa Gira Grant is a staff writer covering justice at The New Republic. She is the author of Playing the Whore: The Work of Sex Work (Verso). She was a senior staff writer at The Appeal, as well as a contributing writer at the Village Voice and Pacific Standard. Her feature reporting has been published by BuzzFeed News and the Guardian, and her commentary and criticism has appeared in The Washington Post, The New York Times, Bookforum and The New York Review of Books. Her essays are collected in Best Sex Writing, The Feminist Utopia Project, and Where Freedom Starts: Sex Power Violence #MeToo.